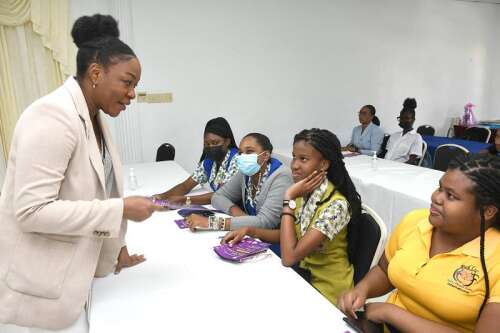 Kids warned about the dark side of the internet

Detective Corporal Samantha Ewan (left) of the police’s Communication Forensics and Cybercrime Division spends some time with these students during the first in a series of anti-bullying workshops run by the Agency child protection and family services at the Medallion Hall Hotel in St Andrew on Thursday (Photo: Garfield Robinson)

An ambassador for ‘Get Safe Online’ – a UK-based cybersecurity awareness portal – urges Jamaican students to moderate their online posts, warning their digital footprint will never be erased and could harm their future in office of their activities.

Roxanne Anderson, who is also an employee of the Jamaica Broadcasting Commission, speaking at the first in a series of anti-bullying workshops organized by the Child Protection Agency and Family Services (CPFSA) at the Medallion Hall Hotel in St Andrew on Thursday, said the material posted online is fodder for bullies who scour the internet for victims.

“The things we post as we browse our online space can have a huge reach. The things we post online are there forever and that’s what a lot of people don’t remember. Even if you’re a bully or the person being bullied, anything you post online is forever, even if you ask someone to take it down for you,” she told the rally, which included students and teachers. , as well as teachers in training.

Emphasizing this point, Anderson said, “If you ask all your friends to delete it, if you went to all the entities that can delete things, that’s not how the internet works; It’s done [still] online and saved online, wherever it is open in the world where it is stored. So try as best you can to think before you act, look at things around you and make the decision based on that.”

“Unfortunately, a lot of people don’t understand the implications of the things they post and how it can come back to haunt them in the future because their actions online have consequences offline,” she noted.

Anderson, meanwhile, said students should protect their personal information while online to avoid being attacked by predators who will intimidate and even extort them. She also advised them to be aware of their backgrounds when taking and posting photos and making videos, noting that information can be gleaned from their backgrounds by people with criminal intent.

Meanwhile, Detective Corporal Samantha Ewan of the Police Force’s Communications Forensics and Cybercrime Division reminded the students that there is a “dark side to the internet”, with cyberbullying being one of the evils.

“With the growth of the digital age comes cyberbullying. Cyberbullying is willful and repeated harm inflicted through the use of computers, cellphones and other electronic devices,” Ewan said, while emphasizing that the Bullying has grown from just being in schools or in person.

Noting that Jamaica currently has no specific law to address cyberbullying, the Corporal called on schools to “establish clear policies regarding cyberbullying not only in school but in all settings where it occurs.”

She said policies need to define cyberbullying and appropriate cyberconduct. She, meanwhile, said that despite the lack of specific legislation to tackle cyberbullying, the Cybercrime Act 2015 introduced a new offence. — Malicious communication using a computer, which “may address some aspects of cyberbullying”.

“This law provides criminal penalties for the misuse of computer systems or data and the abuse of electronic means to carry out transactions and facilitates the investigation and prosecution of cybercrimes. We have had numerous convictions in the courts for malicious communication,” she said, referring to a 2018 case in which a man was convicted of sending obscene photographs and WhatsApp messages to a woman.

According to the National Crime Prevention Council in Washington, DC, 43% of teens are exposed to cyberbullying in some form, but only one in 10 have told their parents.

The workshops are part of CPHA’s response to the problem of bullying in schools. According to the CPFSA, the sessions aim to build the capacity of responders to mitigate the negative effects of bullying on children nationwide.

Six in 10 Jamaican children have been bullied at some point in their lives, while nine in 10 have seen someone being bullied, the workshop was told.