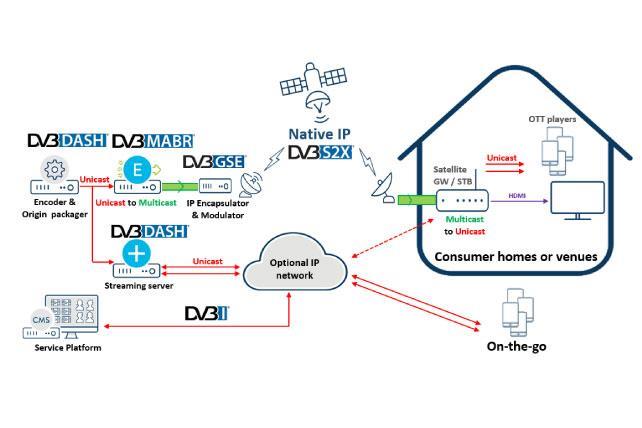 Due to be ratified as a technically specified standard in the January DVB meeting cycle, the Native IP initiative promises a stack of benefits for video streaming. With refined contributions from the DVB ABR, DVB-I and DVB DASH groups, this file-based system opens the door for the industry to say goodbye to the MPEG transport stream, which is not designed for IP devices.

Emily Dubs, Head of DVB Technology, started with the origins of the business requirements, which came from the DVB CM-S satellite group chaired by Thomas Wrede, Managing Director of Technology Vision Consulting.

“The idea is to have a single platform for broadcasting and delivery on the Internet. The initiative came from the satellite guys because their income is stagnating and they have this big footprint, ”she said. “There are exciting opportunities for them in this new area of ​​ODT.

“There are a lot of regions in a lot of countries that don’t have enough bandwidth to be able to broadcast on the Internet, so having OTT channels via satellite would be very useful,” she added. “People have been talking about getting rid of the TS format, for the long term and for the new, but there will be a full native IP solution based on GSE-Lite, plus a backward compatible version to support MPEG-2 TS. “

From a signaling point of view, Native IP reuses most of what users see in DVB-I.

“One of the decisions that was quite important was the signaling side. There will be no modification needed on the DVB-I specification. The capacities will evolve with the evolution of DVB-I. And when HLS is released in DVB, Native IP will benefit, ”Dubs said.

“In terms of EPG, there will be the DVB-I EPG for connected use cases, where devices can be EPG over the Internet. Otherwise, we’ll have simpler broadcast EPGs with no logos. “

“We chose GSE, over for example ALP, which is the link used for ASTSC 3.0. One of the reasons is that it will allow easy transport through all three physical layers, or mainly both. We want this solution to be network independent, and using GSE will quickly simplify that, ”she added. “If we had used something different like ALP, we would have had different implementations regarding the physical network. “

Until the very last mile

Regarding the multicast protocol, Native IP will rely on DVB DASH.

“The multicast protocol was vital. From unicast to multicast, it’s important to be scalable and have constant throughput regardless of the number of users watching. Until the very last mile, you will have flat bandwidth on the broadcast, which is indeed very crucial, ”Dubs said.

For multicast encapsulation, DVB still has to choose between protocols. “For that, we will use either the Flute protocol or the Route protocol. This will only be one of them, ”Dubs said.

“It’s a complementary standard to several others, and in the long run, an ideal way to use it is to have the most popular content using satellite distribution and niche channels operating over the Internet,” a- she added.

“If you have a native IP gateway on your mobile phone, it will check if there is a channel available through the satellite IP gateway, and if it is, it will take it from there instead of the Internet. This is one of the things that makes it very useful.

Being file based, additional capabilities will come. “Anything you can transmit over the Internet could be transmitted using this technology. You can deliver files, VOD in the medium term, and in terms of functionality, I would like to see a dynamic application: the stream could be delivered dynamically via satellite or the Internet. Manufacturers are already thinking about this stuff. But what’s next will be content protection, ”Dubs said.

“There will be no change needed on the DVB-I specification. The capacities will evolve with the evolution of DVB-I. And when the HLS format is authorized in DVB, Native IP will benefit ”, Emily Dubs

“Today we use the GRM to protect satellite content, but of course that requires an internet connection, even though the bandwidth is very low. We need a very specific protection mechanism here, and that will come in the next version of the specification, ”she added. “There is momentum, and there is a need for standards, and Native IP is at the heart of different technologies. “

There are already a number of deployments of this solution, including Astro, a pay TV provider in Malaysia.

“They are struggling because of the lack of the finished standard, but it shows that there is a need, and for this reason we will have the MP just to be able to transport OTT via the normal MPEG-2 TS formats. We made both decisions, to ensure backward compatibility and to use GSE-Lite for the full native IP solution, ”Dubs said.

Native IP will extend from multi-screen consumption of paid video content at home to applications such as e-learning.

“In fact, it works in all public places, for example where you have to wait. You go to the doctor and wait. In Africa you wait for taxis for hours. And then there are the trains. People who wait get aggressive, so if you had the option to entertain them, they would become less aggressive, ”Dubs said.

“One idea that a deployment is already trying to implement is in Latin America. People take very long bus trips, take many hours and cross many rural areas without connection to stream anything on cell phones, ”she added. “In these cases, the satellite dish can be a great option. Satellite dishes are getting cheaper and cheaper and now there are flat and mic antennas that are easy to rotate for a bus to receive OTT satellite services. Receiving Internet by satellite is more complex and requires more precision with the dish.

Another early use case for Native IP is for hotel groups and OTTs.

“Internet subscriptions are quite expensive and sometimes hotel guests are all streaming at the same time. The option instead is OTT via satellite, because the costs are much more attractive, even pre-standard, ”Dubs said. “The goal of standard approval is very difficult as the Native IP Technical Module working group always collects input from the different DVB contribution groups. They will refine the whole document.

Ideas for using DVB-I as a layer of service on top of upcoming 5G technologies were based on study work that identified 5G Unicast, 5G broadcast, and fixed wireless access. 5G as main interests.

DVB Chairman Peter MacAvock said: “The idea is to use 5G in any way possible. We are concentrating on adapting the DVB work to what is happening in 3GPP Release 16. We are going to take the base specification and integrate DVB-I into it.

“We have set up a working group between 5G-MAG and appropriate DVB experts. 5G-MAG has done an interesting job on benchmark tools for 5G media, which we will try to use. The hope is that in a few months we will get all the necessary adaptations of the DVB specification so that the DVB-I adapts to this 3GPP ”, he added.

“You can stream content from a DVB-I service over any type of network. That’s the proposal, and we’re just filling in the gaps, ”MacAvock said. The 5G and Native IP initiatives aim to make the DVB project an internet-centric organization rather than a broadcast-centric organization.