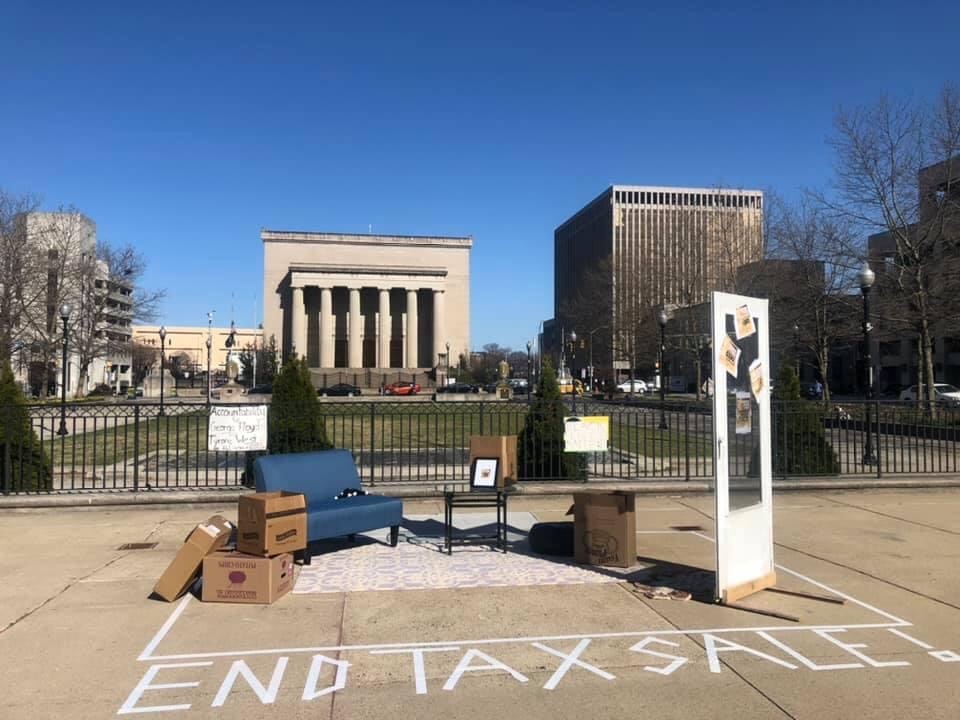 OP-ED: TAX SALE IS A KILLER

By Nneka Nnamdi and Sean Yoes

The tragic deaths of three Baltimore city firefighters: firefighter/paramedic Kelsey Sadler, EMT/Firefighter Kenny Lacayo and Lt. Paul Butrim (Firefighter John McMaster was also seriously injured, but survived), on the morning of January 25, while battling a fire in a vacant house in the 200 block of S. Stricker Street, have refocused the harsh light on the decades-old dilemma of vacant homes in Baltimore.

“It’s a gut-heartbreaking tragedy for our city, the City of Baltimore Fire Department and, most importantly, the families of our firefighters,” Mayor Brandon Scott said in a statement.

Mayor Scott has ordered a citywide review of all vacant housing operations, procedures and processes in the wake of the tragedy. However, burning vacant homes has been a recurring theme in Baltimore for many years. In fact, that same Stricker Street house that collapsed and killed those three firefighters, also caught fire in 2015, and three other firefighters were injured, luckily they all survived. For decades, the proliferation of vacancies in Baltimore has resulted in dozens of firefighters being killed or injured.

The vacancies are violent. And they breed violence.

Of 58 locations with reported homicides (as of March 3) in 2022, 29 occurred on or near property with a vacant construction notice (VBN), tax lien, or demolition; it is a fact, not a coincidence. And it is the result of extractive and exploitative economic policies targeted at black communities, creating concentrated vacancies, poverty and trauma.

Just as vacant homes fuel the blight (and all the evils associated with it), Baltimore’s decrepit tax sales system constantly replenishes the city’s monstrous inventory of vacant homes (there are currently 14,973 vacant homes in Baltimore and 1,232 are city-owned according to Tammy D. Hawley, City of Baltimore Department of Housing and Community Development).

From the City of Baltimore Tax Sale Information website:

“The City of Baltimore holds an annual sale of tax lien certificates. The Tax Sale is used to collect overdue property taxes and other unpaid charges owed to the City,……This is an online public auction of the City’s lien interests in properties. The highest bidder in the auction pays the full amount of the real estate liens to the City and receives a tax sale certificate from the City which entitles the bidder to obtain ownership of the property by filing a tax sale foreclosure lawsuit .”

This year’s tax sales list added nearly 700 properties, from 3,823 owner-occupied units in 2021 to 4,513 in 2022. The increase could be attributed to several factors, with possibly the COVID pandemic -19 tops the list. The cause(s) of the increase can be debated. However, some of the smartest people inside and outside of City Hall, with deep knowledge of how Baltimore’s extremely convoluted and antiquated tax sale works, agree on two things: it is racist and it must be abolished.

“I’ve been working on this tax sale issue since…2012, something like that. As advocates, we have shattered what is nothing but racist property theft,” said Claudia Wilson Randall, executive director of the Community Development Network of Maryland, a community development advocacy organization. “That’s how the system is built and that’s what it’s supposed to do. It is also a very fast way for the city to get money,” added Wilson Randall.

And when those overburdened, poor black homeowners succumbed to a convoluted and inherently racist tax sale system like Baltimore’s, it usually meant “Grandma’s house” was gone forever. Working within a broader white supremacist model of governance, the property tax system has proven incredibly effective in extracting wealth from black people and redistributing it into white hands.

“Fiscal selling is a process that was devised 100 years ago at a time when there were many efforts in public policy to prevent certain groups, typically people of color, from accessing financial opportunities,” said Dan Ellis, executive director of Neighborhood Housing Services of Baltimore, a city agency created to increase sustainable homeownership.

“So it was designed to take the wealth out of communities of color and put it in the pockets of the wealthy, usually white people. And while there is no direct link between the legislation and race, the impact of the tax sale has been disproportionately absorbed by people of color, typically African Americans in Baltimore,” Ellis added. “The impacts of this are still being felt today and will be felt until we reform this system..”

Yet Ellis, who has led the NHS for a decade, is heartened by the work the Scott administration is doing to reform the current corrupt system.

“In my experience and interaction with this administration, I have not encountered any major impediments or denials for significant reform efforts,” he said. “And I am more confident than I have been with any other administration that comprehensive reform is going to take place before the end of this mayor’s first term. We have made incremental changes to a corrupt system over the past 10 years and before that, and we’ve made improvements to it,” Ellis added.

“But, we’re at a point where we have to throw the system out and start over.”

Tragically, for thousands of black Baltimoreans who have lost their homes or loved ones to the violence – vacancy and street – consuming once proud communities, this racist tax sale system, virulently designed to extract black wealth, would have must have been abandoned many years ago. After all, it’s a killer.

Nneka Nnamdi is the founder and COO of Fight Blight Bmore and co-creator of the Stop Oppressive Seizures Fund. Sean Yoes is the Global Newsroom Editor for the Environmental Justice Journalism Initiative and a former editor and columnist for AFRO Baltimore.

Help us continue to tell OUR story and join the AFRO family as a member – subscribers are now members! To rejoin here!