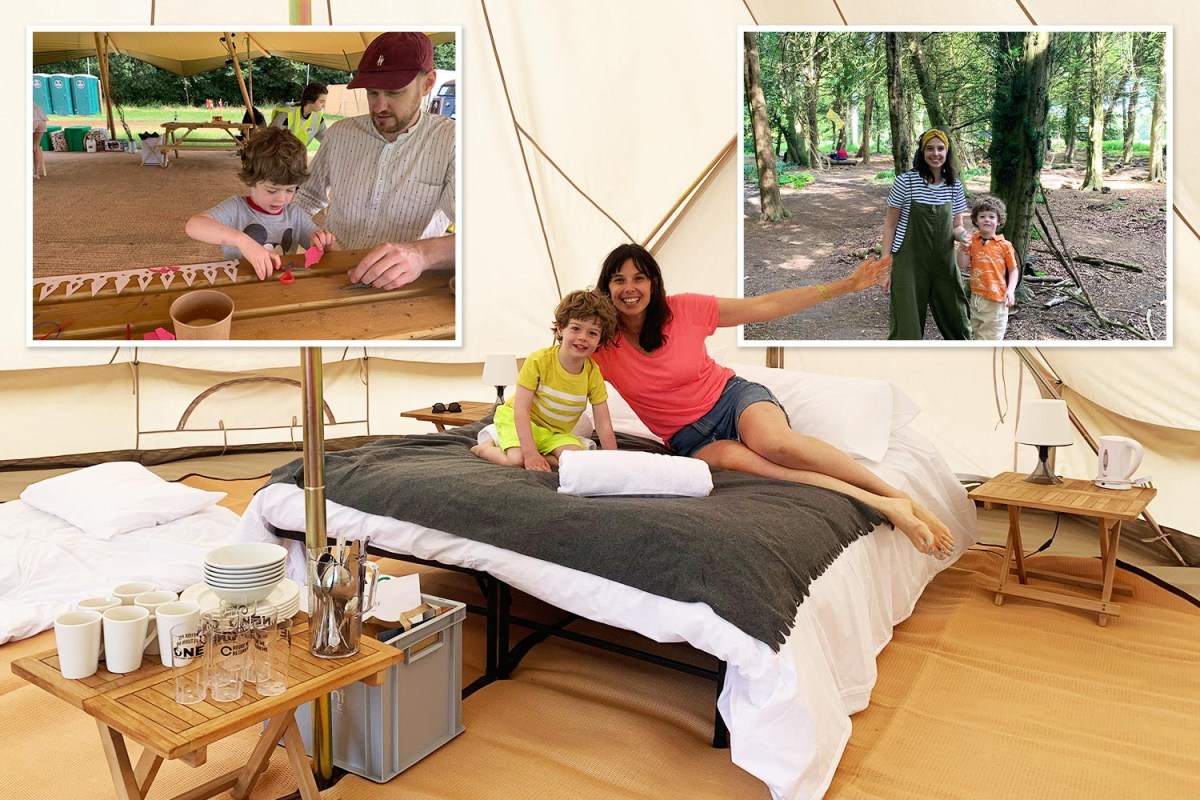 I was making breakfast for my two year old outside our bell tent at the Cloud Nine glamping site in Dorset in July – when a friend texted me to ask if I’d seen the story.

Cloud Nine has two other locations, in Norfolk and the Cotswolds, and vacationers were reportedly angry – they planned everything from food options and the price of a pint (£ 6.50) to dirty showers and lack of activity.

Some, who paid £ 2,000 for a three night stay, felt misled by glossy pictures on the website.

While my stay wasn’t too bad, I felt that they were right. Cloud Nine just didn’t live up to the hype.

The “family rave,” an extra £ 10, was a small tent with a bubble machine, flashing light, and speaker.

A crafting session on how to make natural crowns – another 10 pounds – included gluing a few feathers onto a cardboard crown and painting them with crayons.

We had planned to rent bikes but no child seat was available.

Most disappointing was probably the fair, where you had to buy tickets in advance, but then closed several hours earlier because it was “too quiet” even though families wanted to go with tokens in hand.

We made the most of it, exploring the surrounding woodland, relaxing in our tent and heading to the nearby Bournemouth beach. And the vacation had other pluses.

The luxury bell tents – ours was £ 850 for four nights during the week – were huge, with comfortable beds, good dishes, electrical outlets, their own portaloo and a fire pit.

The seating restaurant was brilliant, with a view of the lake – and the location of the campsite on the grounds of St Giles House in Wimborne was beautiful.

Most of the staff were friendly, and since the negative headlines, there have been changes across all Cloud Nine locations – more activities and staff, and better food.

Suzanne Bayliss, Cloud Nine Glamping Director, said, “In the first two weeks after opening, we had some unexpected operational issues that, despite the best efforts of the team, were affecting the experience of some guests.

“I am really sorry that some did not have the outstanding experience that we are proud of.

“By listening to our customers, we were able to quickly improve our on-site facilities and deliver the family vacation experience we wanted for the rest of the season.”

We left feeling like our break could have been better but we still managed to have a good time.

And I know that we have not been alone with this kind of holiday feeling lately – 2021 was the year of stay roulette, the day trippers who go home raving or raving.

While many have discovered or rediscovered a love for the country or for picturesque coastal cities, others have felt undesirable, uncomfortable or neglected.

Holidays needed optimism because the sun didn’t play along. If you haven’t been fortunate enough to go away in one of the three sunny weeks since May, chances are you’ve been hiding fish and chips under a cloud – or rain.

Some holidays are better suited for this than others.

I went to a Haven park in Norfolk and they put it down but thanks to all the indoor activities we still had a great time. But it was much harder to stay fitter with never-ending downpours on our campervan trip to the Suffolk coast.

Weather was only part of the battle this summer, however, as staff and food shortages in many tourist hotspots have caused hospitality companies to struggle with it.

The pingdemy and the loss of seasonal workers to their home countries due to Covid and Brexit have led to a staff shortage.

Many companies have faced the challenge admirably – pubs that hire delivery trucks to collect beer when the shortage of truck drivers threatened to dry up, workers who put a brave smile on the table in torrential rain, or others who spend incredibly long hours covering absent colleagues.

Some have taken advantage of a loosening of the red tape on pop-up campsites to start successful businesses and go out of their way to impress guests.

But there are many who seem like they are doing customers a favor by taking their hard-earned money away from them.

Locals in some resort towns have loudly expressed their dislike of visitors, and anti-tourist graffiti has even surfaced in Cornwall.

And all for the visitors while paying astronomical prices for the accommodation.

This summer, record demand resulted in holiday parks charging more than £ 3,000 for a week in a trailer, and prices for vacation homes were even higher.

Britain’s coastline, national parks, culture and history are all big draws and many have enjoyed them this year.

This summer I was fortunate enough to have a relaxing week in Cornwall every morning to swim wild despite the rain, have a pint of ale in charming pubs, eat hot pies on secluded beaches and hike in the calm English countryside we have rarely seen another person.

But there are others who have felt discouraged from their stay and will look forward to two weeks in Spain next year.